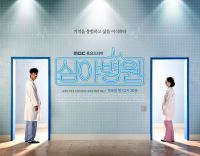 10 episodes - Sat 24:20
Synopsis
What do you do with your life when youve hit rock bottom? In life, there are times when you hit a low point. It could be caused by money problems, relationship problems, children problems, an unexpected accident, or health problems. The list goes on and on. But what compels us to hang onto a strand of hope in such times of despair when ending ones life could stop the pain and darkness? We live in a world where there is a price for everything, even human life. Most people probably know this by now and its a plain fact that just because people are equal it doesnt mean the value of their lives is equal as well. Two people living on the same planet could receive totally different medical treatment. One person could be whisked to the VIP room at a general hospital to receive medical attention from the best doctors while another person could barely see a doctor at the local clinic. Along the way, we have accepted this as the natural way of things. Whether or not youll live depends on your ability to pay. But is this a fact? Is it true that everyones life has a different value?

Hur Jun (Actor Yoon Tae-yeong)
Director of a small hospital. Liver transplant specialist. Graduated at the top of his class from the top medical school in the nation. He can think quickly and has superb intuition. Exceptional hand-eye coordination skills. Known as an accomplished doctor in the field of liver transplants. He witnessed the brutal murder of his wife by an assailant right before his eyes three years ago. The assailant was never caught and the case ended up in court where he was implicated as the prime suspect. But the evidence against him was flimsy and was thrown out by the judge. He was acquitted of all charges. In order to find the assailant who used a special wrestling arm hold, he becomes a professional wrestler himself. He encounters Koo Dong-man who offers him a deal. That is how he became the director of the Midnight Hospital.

Hong Na-gyeong (Actress Ryo Hyeon-kyeong)
A doctor who works the night shift. Fired from her medical internship. Her parents died when she was young and she struggled to make it through school. She decides to become a doctor and takes the MCATs in her late twenties. She barely gets into a medical school, which is ranked in the bottom tier of medical schools. In other words, she was at the bottom of all entering medical students in the nation. As a women who is older than most of her classmates, she has to overcome more challenges than her peers. Upon graduating from medical school, she easily gets an internship at a mid-ranked hospital in Seoul. But she was fired when she made a fatal medical error. She has the dedication and talent that could make her become an excellent surgeon. While applying for internships, she encounters Hur Jun and goes to work at his hospital.

Koo Dong-man (Actor Choi Jeong-woo)
Boss of the East gang. During one of the biggest gang fights in the country in 1975 that broke out in the Savoy Hotel, he was a 17-year-old teenager fighting on one side. He knew the legendary gang bosses of those times. Three years ago he was diagnosed with a hepatic insufficiency. He strikes a deal with Hur Jun to get a liver transplant. He was once a feared gang boss but after becoming ill, he becomes softer and reflective of his life. He tries to remold his organization into a gentler one before passing it on to the next generation so that he can retire. But things are not so simple.

Choi Gwang-guk (Actor Kim Hee-won)
The second in command of the East gang. He used to be a loyal lieutenant who would cut off his hand for his boss if he had to. He once thought about leaving the gang to marry the person he loved. But he has changed and seems to harbor a deep secret. At first glance, he looks like a laid-back, middle-aged man but he is actually a tightly-wound, cruel and cold-hearted person.

Yoon Sang-ho (Actor: Yoo Yeon-seok)
A gangster. Koo Dong-mans personal bodyguard. A high school dropout who used to be a street punk. He was despairing over his life when he caught Mr. Koo Dong-mans eye. He looks up to Mr. Koo as a father figure. He is a tough character with a big heart.

View all 59 pictures for "Night Hospital"