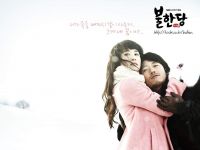 Dallae (Lee Da-hae) is a single mom who isnt picky about her food, laughs a lot and is a loyal friend. After graduating from high school, she meets Tae-oh, a handsome mountain climber, while working in a local bank in Pyeong-chang. She follows Tae-oh to Seoul to get married. She becomes pregnant. But even before the baby is born, Tae-oh is killed in a freak accident in the mountains. Dallae ends up living with her mother-in-law, Tae-ohs mother, and her pretty baby daughter.
One day, her mother-in-law, Sun-sum, forces her to go on a blind date. She's shocked to find an elderly man as her date and rushes out, causing a car accident. The owner of the car is O-jun (Jang Hyeok), a former boxer who quit because he didnt want to mess up his pretty face. Instead, he is masquerading as a fund manager, living off women. To make things worse, he has debts to pay off set on by his sister who is married to an abusive husband. Dallae proves to be a new target for him. But strangely enough, this unsophisticated girl isnt at all interested in him, which makes him want to seek true love in her.

View all 189 pictures for "Robber"