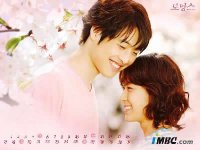 Synopsis
Chae-won, a teacher, gets in a car accident on a getaway to Jinhae and happens to meet a young man, Gwan-woo, by coincidence. Gwan-woo falls for Chae-won at first sight and hides the fact that he's a high school student. They go on a date in Jinhae and discover a mutual attraction. Later, Chae-won finds out that Gwan-woo's father committed suicide because his mother merged with her husband's company. She tries to break off their ties. When Chae-won returns to Seoul, she bumps into Gwan-woo at school and quickly realizes he's actually a high school student. Gwan-woo and Chae-won's relationship becomes known on campus, and Chae-won quits her job. Later, they meet again at HanKang Apparel, Chae-won's mother's company that Gwan-woo's father founded.

View all 26 pictures for "Romance"