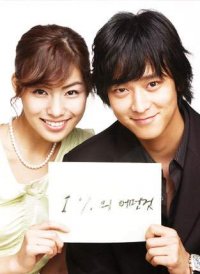 What would you do if you were given the first right to marry a certain girl who will bring you a fortune?

Based on an original novel of the same title, is an exhilarating romantic comedy that takes you on a ride into the boy-meets-girl type of love story. This cute romantic comedy is sure to attract audience of all ages.

Da-Hyun Kim teaches Korean in middle school. One day, on the way home in the subway, she gives seat to a poor old man and helps him with his bags. She soon forgets about this but from that day on, all kinds of strange things start happening in her life. In the meantime, Jae-In is in a meeting at his office when he's interrupted by an urgent phone call. He had become estranged from his grandfather ever since he ran away from home. This also meant deletion of his name from his grandfather's will. But all of a sudden, he now gets a call that his name was written back on his grandfather's will again and what's more, he is also given the order of priority. He's even more surprised when he finds out that it is not the first right to inherit the fortune but the first right to date a certain girl. To make things worse, his grandfather says he'd bequeath his every single fortune to the girl Jae-In has never even heard of.

A Korean teacher in middle school, she is an extraordinary girl from an ordinary family She is a good girl with a kind heart but when it comes to something, which she strongly believes in, she can also be very stubborn. One day she helps a poor old man in the subway but never expects her kindness to come back to her as a total "disaster"(?). Out of the blue comes this indecent guy called Jae-In who accuses her of seducing his grandfather for the sake of his great fortune. A series of fights follow where together they encounter a whole new life style and ultimately love but this doesn't change Da-Hyun. She's one of a kind indeed.

He is the Head of Planning Department at SH Emerald Hotel. He lost his parents when he was young and he brought up by his grandfather. His hot temper often sets him at odds with his grandfather whom he calls "master". In the end, he has a big fight with his "master" and runs away from home to live alone. Jae-In is an undoubtedly handsome and intelligent guy from a wealthy family so many girls look up to him but to those who really know him, he is a total "disaster". One days he gets a call that his name was rewritten on his grandfather's will but his grandfather's proposal to him seems somewhat "crazy". But to get what he wants, he has to marry a girl named Da-Hyun.

She has been Da-Hyun's best friend ever since from middle school and now lives in Da-Hyun's house. For her, Da-Hyun is more like her real sister other than just a friend. She is currently working as the intern at a general hospital. Blessed with both wit and beauty, she is an object of envy among everyone but she also has a story of her own. One days she meets Tae-Ha and falls in love with him.

He is Jae-In's cousin and has been Jae-In's rival ever since he was little. Born 7 months after Jae-In was born, he is also very ambitious and good looking like Jae-In but he knows he can never beat Jae-In. He is now working as the Director of a Department Store.

Something About 1% | HanCinema Reviews

Something About 1% | Soundtracks, OST (Sponsored)

View all 41 pictures for "Something About 1%"

Something About 1% | Links | Suggest a link