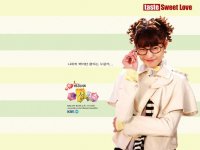 16 episodes - Mon, Tue 21:50
Alsso known as "Snow White"
Synopsis
This is the tale of an intriguing yet perplexing love relationship between three women and two brothers. Ma Young-hee is a star athlete of the shot-put sport nick named wonder woman of track and field and she is secretly in love with Han Jin-woo, a charming, most eligible bachelor, and son a distinct family. Young-hee is candid, passionate but lacks the mesmerizing beauty of her competitor, Jang Hee-won, who is an expert in applying plastic surgery to enhance her beauty as well as no short in tricks in capturing a mans heart. How hard Young-yee must improve herself to win over Jin-woo with her ordinary look and not so attractive physical feather is the core of this drama that produces many laughter as well as sympathies including scenes such as how Young-hees transforming herself from an athlete to a fashion model and her first encounter of plastic surgery experience that only turned out to be a scheme. Worst yet, in the process of pursuing Jin-woo, she mistakenly winded up to have an affair with another man Sun-woo who, as she found out later, happens to be Jin-woos brother. Even Sun-woo is not unattached, closely scrutinizing him is his Japanese girl friend Tsukihara Nako who takes on Young-hee as a natural rivalry. Once the unrefined and rowdy athlete turns into an adorable, sweet and gorgeous snow white, could she success in uniting with her price charming? The result is both surprising and astonishing.