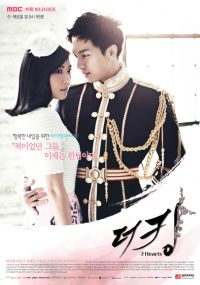 20 episodes - Wed, Thu 21:55
Synopsis
South Koreas spoiled prince encounters North Koreas greatest female soldier! After several awkward and difficult moments, the prince and soldier fall desperately in love. Without any eagerness to bring about the reunification of the two Koreas, they grapple with the disapproval from their families. As a black comedy and romance drama, the show will touch viewers hearts.

Kim Hang-ah (Actress Ha Ji-won)
The greatest North Korean female soldier. She is legendary for her combat skills and beauty! However, Hang-ah wishes to live an ordinary life and have a nice boyfriend. To seize one last opportunity in her life, she enters the World Officer Championship and trains hard to win. But the only reward she receives for her efforts is meeting the South Korean prince Lee Jae-ha. In their first encounter, they have a terrible fight. Prince Lee Jae-ha derided her and insulted her country. But somehow he has also stolen her heart. Prince Lee quickly discovers that she has feelings for him and begins to play games with her heart. Now it has become personal and she will get back at Lee Jae-ha for being so mean to her.

Lee Jae-ha (Actor Lee Seung-gi)
He deliberately acts like a carefree soul who whiles away the time because he does not want to be chosen to be the king. His IQ is 187. His life was going as planned as he put on an act as a lazy and eccentric person but then he faces an unexpected crisis. After completing his mandatory two years in the army, his older brother assigns him to a team that will enter the World Officer Championship, which is full of participants from communist nations! That in itself irritates him but then his brother tells him to marry a North Korean woman. Trying to avoid marriage, he comes up with ideas to escape this order. Just then, his brother, mother and sister face a crisis and Hang-ah is pushed to the brink. He can no longer tolerate the way things are unfolding in his life. As someone who never forgets a grudge, Kim Jun prepares for a showdown.

Kim Bong-gu (Actor Yoon Je-moon)
He is the chairman of an international defense contractor and has enormous influence in world affairs. He goes by the name John Mayer while his Korean name is Kim Bong-gu. He seeks out his father in America and uses his power of persuasion to inherit his dads company and become the new chairman. But he hears news that North Korea and South Korea are trying to settle into a peaceful relationship. How dare they affect his companys bottom line? He is hell-bent on making the people who are behind this peace effort to pay for annoying and humiliating him. There can only be one king in the nation.

Lee Jae-shin (Actress Lee Yoon-ji)
She is the princess and youngest daughter, and thus, her parents doted on her. She is attractive, intelligent, and carefree. While studying applied music in Britain, she returns to Korea abruptly after hearing that her brother is having an engagement ceremony. But she is entangled in an unexpected incident. She is plunged in a terrible situation but finds a way out. She encounters Eun Shi-gyeong who is the exact opposite of her and after many awkward interactions with him, she learns about the world she was sheltered from. But she still does not know much about herself as she is self-centered. The fragments of memories that are buried deep in the recesses of her mind turn out to be crucial clues that could decide the fate of the country.

Eun Shi-gyeong (Actor Jo Jeong-seok)
He will not compromise. He only focuses on what lies ahead in his life. He is a major general and shows strict discipline. But he faces two strange characters in his life - Lee Jae-ha, a clever prince, and Lee Jae-shin, a carefree princess. He wonders what he did to deserve these twin problems in his life. Although they disrupt his disciplined life and cause chaos, he finds himself warming up to their charming qualities.