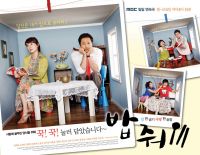 Mon~Fri 20:15
Synopsis
Cho Young-ran is in a loveless marriage due to her aloof and insensitive husband.

Her shopaholic older sister desires a glamorous life, but her poor economic situation leads her to frequently quarrel with her husband. Young-rans younger sister has a well-paying job, but is married to a mamas boy.

This is a story about these three sisters and their topsy-turvy lives! Young-ran is a pretty housewife with a sweet personality. She married her husband after just dating him for a week. But her husband lacks the warmth that she craves for in a loving marriage. Whenever her husband comes back from work, all he manages to ask is Whats for dinner?. Later on, she is shocked to find out that her husband is having an affair with his former girlfriend.

One day, her husbands mistress suddenly goes missing
Suspicions regarding the womans disappearance begin to arise...

Cho Young-ran/Ha Hee-ra
An ordinary housewife with a pleasant personality. She married Jung Sun-woo in an arranged marriage, but her husband turned out to be an insensitive person who doesnt even remember their wedding anniversary. She later discovers that her husband is having an affair, and sinks into despair. Actress Ha Hee-ra returns with her first leading role in 2 years.

Sun-woo / Kim Seong-min
Young-rans husband, Sun-woo runs a health-supplementary food company. At home, he hardly talks with his wife but at work, hes a suave businessman. He still has feelings for his ex-lover; they were forced to break up due his mothers disapproval. So he keeps on seeing her even after his marriage to Young-ran.

Cho Young-shim / Kim Hye-seon
She is Young-rans older sister, who is vain but simple in a cute way. She frequently quarrels with her husband but also makes up with him right away.

Bae Do-shik / Kim Byeong-se
Young-shins husband, Do-shik is a sensitive man who has mood swings at times. He tends to brag about himself, but he is generally a plain and gentle man.

Cho Young-mi /Oh Yoon-ah
. She is Young-rans younger sister, who takes charge of her life with a positive outlook. She has a more progressive mindset compared to her older sisters. Shes committed to her career and is an outstanding employee. But shes married to a mamas boy, which makes her consider divorce.

Kim Yoon-soo / Ha Seok-jin
He is Young-mis husband. Even as a grown adult, he is unable to cut the apron string. He has neither worries nor issues that he dwells on, because he lets his mother take care of all the complicated matters in his life.

View all 95 pictures for "What's for Dinner?"