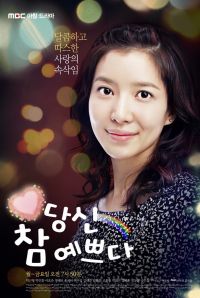 120 episodes - Mon~Fri 7:50
Synopsis
A single mom overcomes a broken heart and betrayal to succeed in life.

Koh Yoo-lang | Actress Yoon Se-ah
Shes confident and optimistic about life in general. She falls in love for the very first time with Chi-young. But Chi-young suddenly leaves her to return to Seoul. Desperate to be with Chi-young, Yoo-lang flies to Seoul only to find out that he is a married man.

Park Chi-young | Actor Kim Tae-hoon
Ruthlessly ambitious, Chi-young only cares about succeeding in life and that is why he married Anna. While going through the motions in his marriage, he takes a business trip to Jeju where he meets Yoo-lang and feels intense feelings for her that result in a romantic relationship. When Tae-hoon is appointed as the general manager of a hotel, he returns to Seoul and leaves Yoo-lang behind.

Byeon Kang-soo | Actor Hyeon Woo-seong
He is laid-back and has a liberal streak. One day, he visits his grandfather who lives in Jeju and meets Yoo-lang there by coincidence. Through a series of unexpected events, he meets her again and again until finally, he finds himself living with her under the same roof.

Cho Anna | Actor Park Tam-hee
Although she appears to be fragile, she has a strong will and a self-centered personality. She married Chi-young through a date arranged by her parents. Despite his reassurances that he loves her, she constantly worries that he might leave her one day.

You Are so pretty | Cast

You Are so pretty | News

You Are so pretty | Shopping

You Are so pretty | Soundtracks, OST (Sponsored)

You Are so pretty | Pictures

View all 32 pictures for "You Are so pretty"

You Are so pretty | Videos | Suggest a video

You Are so pretty | Links | Suggest a link

You Are so pretty | Reviews

You Are so pretty | Facts

You Are so pretty | Community

You Are so pretty (당신 참 예쁘다)