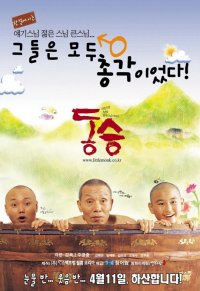 Synopsis
Three monks from three different generations are living in a quiet, secluded mountain temple. The little nine-year-old monk is longing for his mother, and the 20-year-old monk is haunted by a pretty girl he once met. The temple master, who has yet to become enlightened, is trying to act indifferent to the pains of his disciples. The little monk becomes attached to a lady who visits the temple to pray for her own recently deceased son, and feeling motherly towards the little monk, asks the temple master about adopting him. Meanwhile, the 20-year-old monk, in a severe struggle with lust, decides to leave the temple. Finally, the little monk's wish to live with the woman starts to become a reality, but he is caught for having killed rabbits, and everything begins to unravel as new facts are revealed.

View all 44 pictures for "A Little Monk"