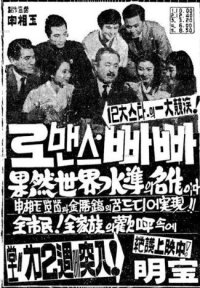 Synopsis
A husband (Kim Seung-ho-I) who works at an insurance company and is called 'Romantic Papa' by his five children lives happily with his wife (Ju Jeung-nyeo) and family. The eldest daughter, Eum-jeon (Choi Eun-hee), graduates from college and marries Jeon Woo-taek (Kim Jin-kyu). The eldest son, Eo-jin (Namkoong Won), pretends to be going to college but works behind the scenes trying to prepare to be a movie director. The second daughter, Gop-dan (Do Kum-bong), is a college student, while as the second son Ba-reun (Kang-Shin Sung-il) and the youngest daughter Ippeuni (Um Aing-ran) are high-school students. Although the father's salary is barely enough to feed the whole family, he takes care of his family with an optimistic nature and a penchant for laughter. However, due to his old age, the insurance company lays him off. Worried about disappointing his family, he doesn't tell them the news. Although his sons and daughters eventually find out, they pretend not to know while trying to figure out a way to console their father. On his birthday, the entire family gets together and has a wonderful time.

View all 20 pictures for "A Romantic Papa"