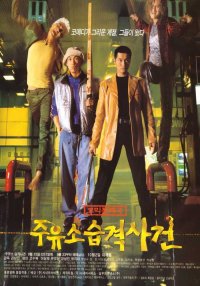 Synopsis
Four friends -- a rebellious athlete, an amateur rock musician, an aimless painter and a grim-faced fool -- decide to rob a gas station just for fun. Once there, they find a tightward owner and three parttime workers: a slimy ass-kisser, a brainy nerd, and a sexy girl the other two are interested in. The three come to learn an entirely new mode of existence through the young crooks, who lead them through a series of dumbfounding events. Without knowing how to operate the gas pumps, the robbers can only fill up the customers' tanks, regardless of how much they may actually want. When faced with the customers' complaints, they simply take them hostage. When a crowd of teenage hoodlums come looking for money, they take them hostage, too. They beat up a Chinese food delivery boy who asks for extra change, prompting a gang of delivery boys to attack the station. In the meantime, a gang of local thugs come to recue their captive friends, leading up to a chaotic final confrontation which threatens to end them all.

View all 28 pictures for "Attack the Gas Station!"