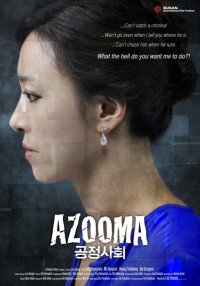 Synopsis
A former dental technician, currently working as an insurance saleswoman, Yoon young nam manages to live with her 10-year-old daughter. One day, she finds out that her missing daughter has been raped on her way home from school. She reports to the police only to be disappointed by the inabilities and intrusiveness of the police. After going through consecutive failures of seizing the rapist mostly due to the indifferent and passive attitudes of the police, she changes her mind to chase after the rapist for herself with all kinds of measures that she can take.
One by one, she takes severe revenges to the rapist as well as those who sabotaged and disrupted her (including her husband) with a way she knows best.

View all 58 pictures for "Azooma"