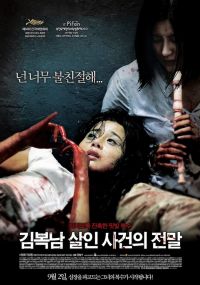 Synopsis
Sick of all the inhumane treatment by others, Bok-nam tries to escape the island with her daughter, but her daughter gets killed in the process. When she loses the only thing that had kept her going, Bok-nam takes a sickle in her hand for revenge.

View all 31 pictures for "Bedevilled"