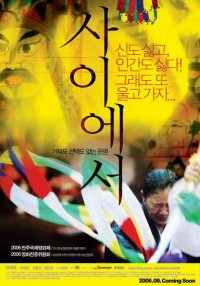 A 28-year-old girl, In-hi, experiences paralysis in her upper body to which she does not know the cause, and her family continues to get into accidents. She saw this as some kind of curse and visits Hae-kyung, the female shaman. In-hi finds out that she is destined to be a shaman and falls into dilemma.
Korean Shamans are the intermediary that link living humans to the world of the spirits and the world beyond, reality and a non-realistic world. They have sometimes played a role as an advisor of life, sometimes as cursed messengers of weird gods. They are a group of people who are usually despised by others, but they have been around for the past 5000 years, carrying the burden of the gift that god has bestowed upon them.

View all 23 pictures for "Between"

Between | Videos | Suggest a video

Between | Links | Suggest a link