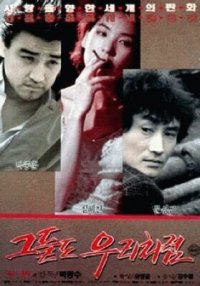 Synopsis
Gi-yeong a student activist wanted by the government for leading demonstrations hides out in a 'soon-to-be-abandoned' coal mine and works as a gofer. Sung-cheol, the coal factory owner's son, is known around town for being a tyrant in nearby coffee shops and bars. He shows uncharacteristic interest in Gi-yeong. Yeong-sook, who sells more than coffee at the coffe house, is fascinated by Gi-yeong's qualities. She decides to pursue love by giving up prostitution. Their love remains even after the threat of a worker strike. When Sung-cheol hears about his mother's death, he becomes violent towards Yeong-sook.. Gi-yeong tries to stop the fight but is pulled into it and mistaken by the police as a perpetrator. After the torture he endured, the police let him go. Gi-yeong has no choice but to leave town because his identity has been exposed. Yeong-sook sets off with him to leave the coal mine village but on her last coffee run, she runs into Seong-cheol. She kills him when he tries to stop her from leaving and is dragged off by the police as Gi-yeong watches on.

View all 5 pictures for "Black Republic"