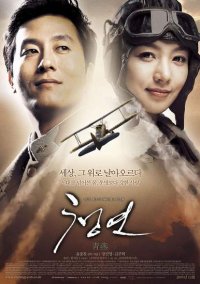 Synopsis
Dreaming of flying ever since she was a child, Park Kyoung-won goes to Japan to fulfil her dream. While she is breaking every record as a great pilot, Kyoung-won meets her love, Ji-hyuk, a Korean serving in the Japanese army. Kyoung-won has to compete against Gibe Masako, a famous Japanese female pilot. But the rivalry between them grows into friendship, turning Gibe into her biggest supporter. When she is put into the jail on suspicion of taking part in Resistance activities, Ji-hyuk confesses that he is guilty only to save her. In despair, Kyoung-won leaves for her country with Ji-hyuks ashes in her plane, Blue Swallow.

View all 44 pictures for "Blue Swallow"