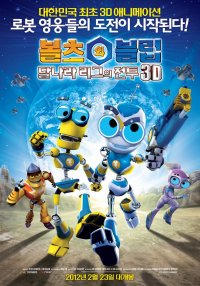 "Bolts & Blip" is a co-production between South Korea and Canada.
Synopsis
In the year 2080, the Earth and the moon were at peace.
Tired of the same old daily routine, the ordinary robots 'Bolts' and 'Blip' coincidentally are chosen as battle robots. They join the perennially bad 'Thunderbolts' team to fight in the Moon League.
However, as the competition begins, 'Blip' realizes he has specials powers and soon becomes the hero of the planet. Just then, 'Dr. Blood' threatens to take over the Earth and 'Bolts', who was jealous of popular 'Blip', teams up with Dr. Blood.
Now it is left to 'Blip' to face the challenge of saving the planet and regaining his friend 'Bolts'.

View all 24 pictures for "Bolts and Blip - Movie"