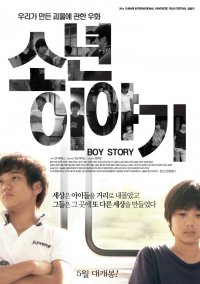 Yeong-hoon is a 13-year-old boy who leaves his house not being able to stand his fathers abuse anymore. He has no place to go so he takes the subway to Oido and there he meets Hyeon-soo, a orphan the same age as him. Hyeon-soo has already been to the Detention Center for Teenagers and his rough actions causes Yeong-hoon to feel aspiration and depend on him. One day, Hyeon-soos girlfriend Han-na gets pregnant so Hyeon-soo and Yeong-hoon heads to Seoul Station, where rugged kids like them live in a group...

View all 12 pictures for "Boy Story"