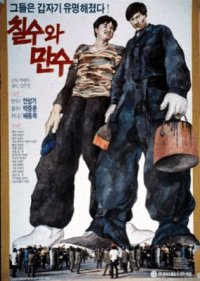 Synopsis
Born in Dongduchon, Chil-su is talented in art. While waiting for a wedding invitation from his sister in America, Chil-su quits his job painting theater signs which is his livelihood. He becomes Man-su's assistant. Man-su is in the army serving his military duty. He suffers under the dark shadow of his father. Chil-su gets dumped by Ji-na, a college student, and he loses all contacts with his sister. Understandably, Chil-su feels a little shaken. On the other hand, Man-su is unable to find stability. One night after they finished a large billboard, the two rave around the tower goofing around. However, the police are deployed when they misunderstand and think that they are trying to kill themselves. Through their misunderstanding, Man-su ultimately falls and injures himself while Chil-su is led away by the police.

View all 14 pictures for "Chilsu and Mansu"