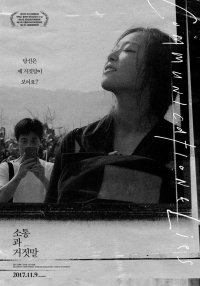 Synopsis
This black and white film with a 4:3 aspect ratio unfolds following an abnormal couple. An eight-minute long take intro doesnt show the main characters face, but shows the other womans face, who keeps asking questions. One of the private institutes teachers interrogates the woman, seemingly a cleaning woman there. Is it true that she slept with one of the male teachers whenever they eat out? Is it also true that she was taken pictures? She answers yes. Another main character is one of the private institutes male teachers. He phones the Dasan Call Center and talks nonsense, saying that the dog next door stares at him every day, so do something about it. A woman and man with psychological problems meet and carry out some bizarre acts. These two, unable to communicate with the world, fail to communicate with each other too, evoking a strange sadness in the audience. NAM Dong-chul)

View all 11 pictures for "Communication and Lies"