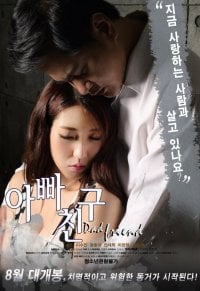 Synopsis
Seok-ho whose wife passed away 10 years ago, doesn't have children and is living a simple life on the outskirts of Seoul running an agricultural agency. His gums start hurting one day but the dentist say there's nothing wrong with him. However, the pain gets so bad it hurts his head sometimes. Seok-ho becomes sad, thinking that this is what 'aging' is. On his 55th birthday, his one and only friend Byeong-sik invites him to his house and makes him a birthday dinner. There's Se-hee, Byeong-sik's daughter who's all grown up now and Seok-ho feels funny at the sight of the full-grown girl. Meanwhile, Se-hee and her boyfriend make plans to get their hands on Seok-ho's money and succeed in approaching him. However, her boyfriend betrays her and she witnesses her divorced father having an affair with someone else. She decides to go bad but she has no where to go. Then she thinks of Seok-ho who is always on her side. She starts to feel more than comfort for him and so does Seok-ho but he still misses his wife and he can't do that to his friend so he tries to ignore her...

Will Seok-ho who is terminally ill and Se-hee be able to be together?

View all 9 pictures for "Dad's Friend"