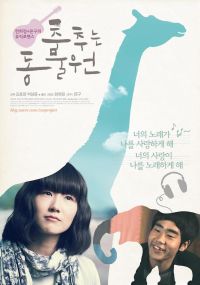 I love your song; I love your smile
I love your world. Meet the magic of love, which can be either sharp (#) or flat (♭)!
Joon-soo, who decided to move to Seoul to fulfill his dream of being a musician, accidently meet Hee-jeong, who just broke up, while he was singing a breakup song to a monkey in a zoo. They get closed to each other through music, and Joon-soo helps Hee-jeongs band as a guitarist. They eventually live together in a house.
One day, their relationship, which was already dangerous due to their different musical world, is finalized when Joon-soo plays his part differently. Joon-soo becomes famous after he got into a big entertainment company but Hee-jeong hold concert alone in a club. But they realizes each others empty space and automatically look for each other

View all 18 pictures for "Dancing Zoo"