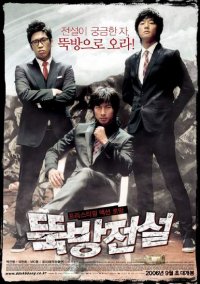 Official English title : "Riverbank Legends"
Alternative title : "Three Fellas"
Synopsis
Seong-hyun, Gyeong-roh and Jeong-gwon are the best of friends. At school, Jeong-gwon is second to none in fighting. Seong-hyun is also a famous fighter. But Gyeong-roh on the other hand is just a slick. These three called themselves the ¡°No Touch Clan¡± since they are the untouchables in town. After graduation these inseparable three start their own lives until Jeong-gwon returns to their hometown. Jeong-gwon, who became a real gangster, has just finished his time in jail. But it is not just Jeong-gwon who has changed. The town itself has changed too. Buildings are going up on every corner as Mafia groups enter the town, trying to get hold of concessions and power. A peaceful town is now swarming with gangs and groaning in chaos with these three friends accidentally getting caught in the middle of all this mess.

View all 44 pictures for "Ddukbang"