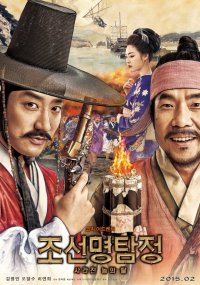 Formerly known as "Detective K: The Laborer's Daughter" (조선명탐정: 놉의 딸, jo-seon-myeong-tam-jeong: nob-eui ddal)
Synopsis
Its our time to step up once more!
In the 19th year of Jeonjos reign, Kim Min, Joseons top detective, who used to be a Kings secret messenger, has been banished to a remote island for some unclear reasons. The only visitors are his old partner, Seo-pil and a young girl, who comes every day to ask him to find her younger sibling.
In the meantime, Kim Min happens to hear a rumor that bogus silver bars have been being distributed, which awakens his dormant traits as a detective.
He finally makes a bold decision to escape the island and moves on to investigate the case of bogus silver bars fully and to find the young girls younger sibling. Joseons top detective, Kim Min and Seo-pil may be the first detectives in the history, who stepped up to solve two different cases at the same time!
But Hisako, a beautiful, mysterious woman with her identity unknown, continuously interferes the investigation conducted by this excellent pair of detectives.
Kim Min and Seo-pil, the excellent pair of Joseons top detectives return.
Joseon in jeopardy. Leave it in our hands!.

View all 97 pictures for "Detective K: Secret of the Lost Island"