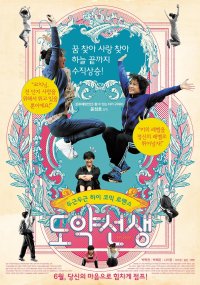 Synopsis
A movie is being produced in agreement with the 2011 World Athletic Championships in Daegu. The challenge of rising pole jumper Ha-ra based in Daegu where the 2011 World Athletic Championships are being held. Won-sik parts ways with roommate Woo-jeong and wackily starts long jumping at her suggestion that she might rethink about this if he showed something manly about himself. Former track and field coach Yeong-roks suggestion to jump over the rooftop house to impress his lover and the adventures of to-ve idol Jae-yeong who tries to stop this challenge but ends up doing it together.

View all 9 pictures for "Dr. Jump"