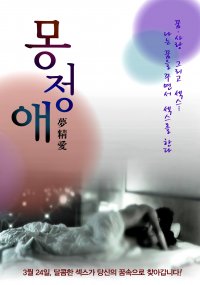 Synopsis
One day she faintly appears in Min-woos dream. Min-woo has no way to find out who the girl he had intercourse with in his dream is and he doesnt have the breadth of mind to. Min-woos life goes by dryly and his wife Yeon-joo becomes colder and conflicts with her get deeper. Trying to avoid these situations Min-woo tries hard to tune in with Yeon-joo and write down his resume. Da-eun is a close friend of the couple since university. She sees Yeon-joo heading for somewhere with another man thats not Min-woo accidentally. Da-eun stands by Min-woo and holds his hand because he looks so lonely standing in the middle of conflict with his wife and he tries to act like nothing's wrong. They end up having a dreamlike one night. The love they shared in his dream is now facing them.

View all 6 pictures for "Dream Affection"