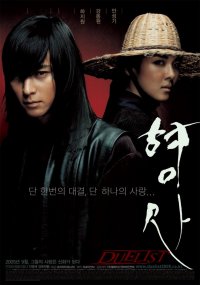 Synopsis
Once upon a time in Korea, the Minister of Defense, SONG Pil-joon, gets rid of his political opponents and assumes complete control of the armed forces. Also Song goes on to stamp counterfeit money. Detective Nam-soon goes forthrightly undercover with her partner Detective Ahn to investigate the counterfeit money. She discovers that one loyal henchman, Sad Eyes, a beautiful swordsman with a pale, blank face, is covering up Minister Songs tracks. Nam-soon and Sad Eyes confront each other in a series of duels - tirelessly chasing, being pursued and dodging each other. Inevitably, they fall in love. Each struggles to reconcile the desperate conflict between love and obligation to duty, as they square off to meet their fate in one last duel.

View all 70 pictures for "Duelist"