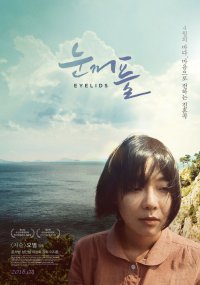 Synopsis
An old man living on the island of Mireukdo lives a self-sufficient life, adhering to ascetic principles typical of a monk. Now and then the phone rings and shortly thereafter a visitor arrives; the old man dutifully prepares rice cakes for them. The cakes are the last meal these visitors will eat before embarking on the seemingly long journey to the next world. The first to arrive is an angler, then a rat, and the last a teacher and two students. Despite so few characters, the film manages to impart a mystifying ambience by capturing stirring views of the sea, forests, insects, goats, and other similar imagery. In "Eyelids", Mireukdo occupies a strange time and space; it is neither of this world nor the next. Instead, it serves as a final calm and heartrending place of solace for those whose lives were unfairly taken. This is not director O Muels first foray into such a realm. In 2012 he made the award-winning "Jiseul", which similarly depicted a great in-between for souls. (NAM Dong-chul)

View all 20 pictures for "Eyelids"