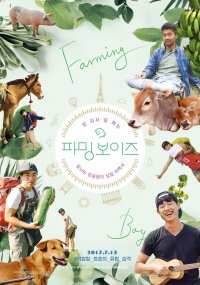 Synopsis
Three young men in their twenties go on a trip across the globe. They make money with a working-holiday program in Australia and record their experiences travelling to farms around the world. They dream to be real farmers. Being in their twenties, becoming farmers and world travel are three things that do not seem to match. At this time, when neither children dream of becoming farmers nor young people of living in the country, the balance among the unbalanced is fresh and introspective for itself. Another charm of this movie is the way it records these young mens eccentric behavior. They are bold and natural as they take pictures of each other or selfies as if they are using the language of the smart phone generation. They blur the border of privacy in the way they expose themselves, explain situations and express their feelings as they experience, record, observe and move on. In this sense, a camera is their fourth companion and the reflection of themselves. The film suggests that we confront the questions as to the bold and young energy on the one hand, and the life that cant stop its accelerated velocity moving in one direction on the other.(Lee Seung-min)

View all 25 pictures for "Farming Boys"