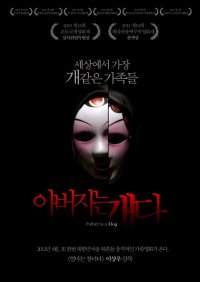 Since "Tropical Manila", director LEE Sang-woo-IV has picked up his pace in making films. Besides "Mother Is a Whore", LEE has finished two films a year and has grown to be an important figure in the independent film scene. While "Mother Is a Whore" tenaciously deals with the collapsing relationship of a family through a mother, "Father Is a Dog" describes the relationship of a father and his unknown sons. Full of allegoric devices, LEE's films often unfold with unique and violent scenes. Through these scenes, Lee strives to seek the truth of how cinema reflects the world and also how it functions as a window to the world. When watching his films, his career as an assistant director to KIM Ki-duk stands out. However, in comparing him to KIM Ki-duk, Lee frames things in a different way and deals with relationships more mechanically. Like a game of the father, the world in LEE's films must be a stage setting with immense gears. (LEE Sang-yong)

Father Is A Dog | News

Father Is A Dog | Shopping

Father Is A Dog | Pictures

View all 13 pictures for "Father Is A Dog"

Father Is A Dog | Links | Suggest a link

Father Is A Dog | Reviews

Father Is A Dog | Facts

Father Is A Dog | Community