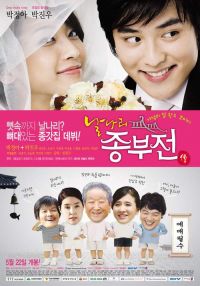 Alternative title : "The Taming of the Shrew"

Inspired by Shakespeare's classic of the same name. Yeon-su is a beautiful but naughty young woman whose family became millionaires overnight. All men fall in love with her at first sight, but Jeong-do, the only son of a respected family, has no regard for her. Yet despite this, the two fall in love and get married. However, their conflicting families shake up their wedded bliss. 12 and over.

View all 22 pictures for "Frivolous Wife"