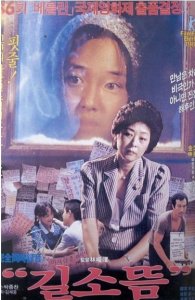 Synopsis
In the summer of 1983, many were searching for family members who were separated during the Korean War. At her husband's urging, Hwa-yeong goes to a meeting place to see if she can find her son when she gets caught up in memories. With the liberation of the nation, she goes to the town of Kilsodeum and becomes an orphan. Hwa-yeong goes on to live with her father's friend, Kim Byeong-do and falls in love with his son. In Yeouido, at the meeting spot, Hwa-yeong meets Dong-jin. Though he is married to another woman, he had been waiting for her. With him is Hwa-yeong's son, Seok-cheol. Meeting Seok-cheol, Hwa-yeong feels the distance of 33 years between her and her son. However, she weeps tears as she identifies Seok-cheol as her son.

View all 67 pictures for "Gilsotteum"