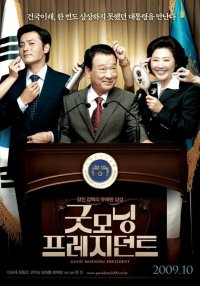 The film takes viewers to the private quarters of the Blue House during the terms of three fictional presidents. Kim Jong-ho wins the lottery just before retiring. Cha Ji-uk, a young, handsome single parent, romantically involved with his childhood sweetheart, must deal with diplomacy problems. Last but not least, the nation's first female president, Han Gyeong-ja, has to deal with a loving but rather troublesome husband.