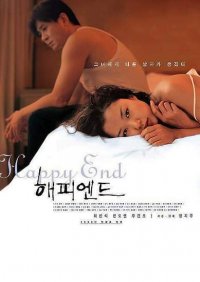 Synopsis
Min-ki is a banker who gets laid off after six years of service. Although he's under constant sense of uneasiness, he lives his new leisurely life without stress of work, thanks to the uccessful career of his wire Bo-ra. Taking care of their baby daughter, doing the housework, and spending quiet time reading at the park. these are all blessings for Min-ki. Meanwhile, Bo-ra is having an affair with her college sweetheart Il-bum, with whom she was separated when he he left for the military. Although she treasures her family and desires to keep it together, she is moved by ll-bum's love and by the sweet reminiscence of her youth. Soon, Min-ki discovers their intimate relationship, which brings about much pain and confusion among the three. All three dream of the possiblities for a happy end, bring about an unexpected outcome.

View all 19 pictures for "Happy End"