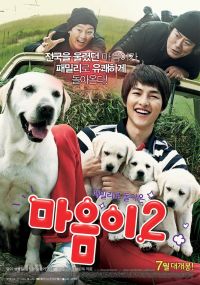 Also known as "Hearty Paws 2"
Heart is..., the movie that reduced the whole country to tears, is back. This time, the sequel intends to break even more hearts.

Since the last movie, Dong-wuk (Song Joong-ki), now a high schooler, has had to transfer to three different schools, as his reputation as a skilled fighter has always brought trouble. Yet, even through the difficult times, Maumi has stayed loyal to her beloved owner.

But when Dong-wuks mother becomes concerned that her son is spending too much time with Maumi, she temporarily sends the dog and her three puppies away to Dong-wuks uncle.

One day, two jewelry thieves on the run, Heyok-pil (Seong Dong-il) and Du-pil (Kim Jeong-tae), spot Maumi and her puppies. They hatch a plan to kill one puppy to stuff him with hidden stolen jewels. The plan is on when they manage to nab the youngest puppy, Jang-gun. When her puppy is taken in front of her eyes, Maumi chases the thieves.

When Dong-wuk visits his uncle to see Maumi, he realizes that his beloved dog and her pup are nowhere to be found, and his search for his best friend begins.