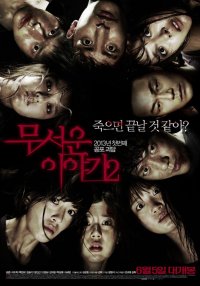 Synopsis
Follow up to 2012 omnibus movie "Horror Stories".
Segments :
"Escape" (탈출, Tal-chool) directed by Jeong Beom-sik
"The Pain of Death" (사고, Sa-go) directed by Kim Hwi
"The Cliff" (절벽, Jeol-byeok) directed by Kim Seong-ho
'444' directed by Min Gyoo-dong
In an insurance company, Yoon, who is an outsider, has a power to see peoples past and read their minds. Mr. Park, Yoons boss, assumes that she has some kind of special power, decides to test her ability. At very late night when everyone has gone home, Mr. Park brings Yoon to a storage room where there are full of case reports. Among them, Mr. Park picks three doubtful cases. He asks Yoon to tell him what exactly happened. Yoon, who senses some dark aura wandering around him, tells the story of each case. Every time Yoon finishes each case, the dark aura gets darker and bigger and Yoon tries to warn Mr. Park about it. Would Mr. Park able to escape from the dark aura?

View all 87 pictures for "Horror Stories 2"