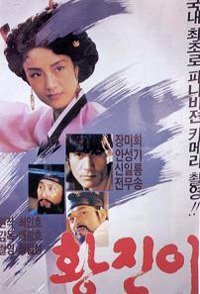 Synopsis
Jin-ie, daughter of magistrate Hwang, with both wits and beauty, is dumped the day before her wedding because of the suicide of a leather-shoe maker who had a crush on her. Shocked by the shoe-maker's death, Jin-ie becomes a kisaeng. Her fame as a kisaeng grows far and wide. Jin-ie meets and falls in love with Byuk Kye-su. However, Kye-su is selected to be the envoy to the Kingdom of Myung. When he leaves Jin-ie's arms, she is stricken by feelings of betrayal and leaves to become a wanderer. Afterwards, Jin-ie meets the poor scholar Lee Saeng. She stays with him for a while but when she finds out that Lee Saeng is about to sell her to a vagabond clown group, Jin-ie follows the clown group willingly.

View all 10 pictures for "Hwang Jin-ie"