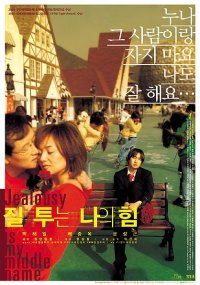 Synopsis
Lee Won-sang is a graduate student working on his thesis. He works part-time to save enough money to study abroad. One day when he is told by his girlfriend that she had fallen in love with a married man, he turns away coldly. He comes to meet the man in question, Han Yun-shik while helping his friend who works at a magazine publishing company. On impulse and a kind of strange curiosity, he decides to get a job there. He meets Park Seong-yeon who is a veterinarian and an amateur photographer, and gets to like her. Knowing that Seong-yeon doesnt like her job as a veterinarian very much, Yun-shik offers her a job as photographer at the company, and also wants to seduce her. Yun-shik who at first had set out to do his usual seducing routine, finds himself genuinely drawn to her, and Seong-yeon liberally accepts his boyish charms. Won-sang catches on what is going on between the two and pursues her even more sincerely, but despairs at the thought that he cannot make her truly happy.


Jealousy Is My Middle Name | Cast

Jealousy Is My Middle Name | News

Jealousy Is My Middle Name | Pictures

View all 25 pictures for "Jealousy Is My Middle Name"

Jealousy Is My Middle Name | Videos | Suggest a video

Jealousy Is My Middle Name | Links | Suggest a link

Jealousy Is My Middle Name | Reviews

Jealousy Is My Middle Name | Facts

Jealousy Is My Middle Name | Community