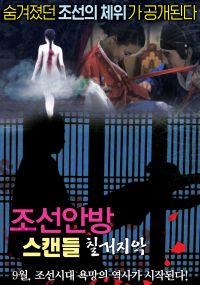 Synopsis
The Seven Valid Causes for holding a Joseon wife back! Their unconfucian and cheeky marriage life begins now!

The First Story : Lewd Act
Seon-hwa and Dae-eui are an ordinary looking couple but they are sex-less. Seon-hwa is lonely in her room but one day meets thief Cha-dol. After Dae-eui passed the civil examination he's always busy and ignores Seon-hwa but Cha-dol shows her what love is...

The Second Story : Jealousy
Ji-eun loses Jeong-in in an accident and her parents set up a promised marriage for her. She gets married again but her husband Won-bok doesn't show interest in Ji-eun and only has eyes for the gisaeng and wine. She doesn't hide her jealousy for Myeong-wol who is the concubine and is about to get divorced...

The Third Story: Childless
Jang-ho and Mi-ok's parents are friends and one day they end up getting married. They have a great marriage life although Mi-ok doesn't have a son, and her mother-in-law starts bullying her, then brings a surrogate mother named Joo-ran. Jang-ho is stuck between the two women and goes back and forth trying to ease them...

The Fourth Story : Suspicion
Myeong-eui is sure her husband is cheating on her when he starts carrying around a large amount of money and spends nights out. She steals his money and hides it where he won't find it. He shows her affection and tells her there's no need to be suspiciuous but her suspicion only gets bigger...