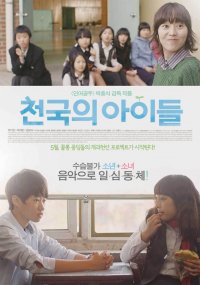 Synopsis
Kids of Heaven (2012) was directed by Park Heung-sik, who has a strong reputation for producing heart-touching films, as shown in his movies I Wish I Had a Wife (2000) and My Mother, the Mermaid (2004). In his latest film, Park again puts forth an emotional story, this time at a middle school where a temporary teacher is called on to take care of troubled students.
This movie attracts special attention as its production was funded by the Seoul Metropolitan Office of Education. It raises awareness of the issues teenagers often face, such as school violence.
In the movie Yoo-jin (Yoo Da-in), the temporary teacher, leads a group of troubled students including Jung-hoon (Park Ji-bin), who was kicked off the soccer team for violent behavior, and Sung-ah (Kim Bo-ra), who smokes cigarettes on the street, to create a musical group and perform in the up-coming talent show. The musical training gives the students confidence as they gain a sense of accomplishment that they have never felt before.
Despite the troubles the students cause and their negative influence at school, the movie shows sympathy toward the teenagers and turns the perspective around to educate the school system to build a friendly environment that encourages support.
Park said that the expected typical story line was avoided. Although the message the movie ultimately conveys to the audience might seem typical, the individuality of this film is separates it from other teen movies as it approaches the students and sympathetically.

View all 34 pictures for "Kids From Heaven"