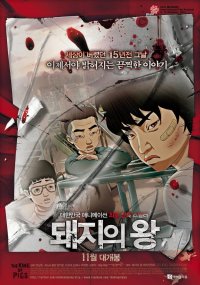 Synopsis
"Hell, Two Lives", and "Love Is Protein" (from "Indie Anibox : Selma's Protein Coffee") director Yeon Sang-ho's first long animation, targeted to adults about the cruelty of reality and human nature.
Following on the success of "Leafie, A Hen Into The Wild", which broke the box office record for Korean animation, selling over 2 million tickets, "King of Pigs" offers yet another kind of meaningful film in Korean animation history. Director Yeon Sang-ho has worked on his own since 1998 and made this, his feature debut, with a budget of only $150,000. Unlike most commercial animated films, it targets strictly adults, being a cruel thriller about two middle school friends reunited 15 years after graduation. The film reveals a shocking story of bitter doom and gloom and the grim visual style goes with it. Voice actors performances and animation work are impressive. The film also casts a serious and critical view on social issues as well. It goes without saying that Pig characters are the personification of us in the modern society. (JEON Chanil)

View all 82 pictures for "King of Pigs"