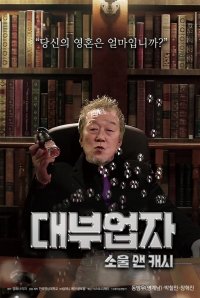 The hearing of Chun Soo-gwan, the representative of 'Soul & Cash,' which lends people money in exchange for their souls, is broadcasted worldwide from the Korean National Assembly. The members of the National Assembly who usually bicker with each other behind cameras band together to attack Soo-gwan with questions.

View all 11 pictures for "Lenders: Soul and Cash"