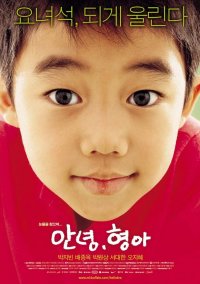 Synopsis
A warm and touching drama about nine-year-old Han-i, a brat who causes all sorts of problems wherever he goes. Han-i believes that his dad, mom and brother are all under his control. Suddenly, when he learns that his older brother is ill, everything changes and he faces his most challenging task ever. Han-is brother, Han-byeol is diagnosed with cancer and has an operation. Some conflicts ensue between Han-i and Han-byeols new friend, Wook-i, whom he meets at the hospital. Wook-i has been suffering from leukemia for a long time, but he is a favorite in the hospital because of his abundant humor and positive mind. Finally, Han-i solves the complicated matter of his relationship with Wook-i and starts behaving to save his brothers life.

View all 85 pictures for "Little Brother"