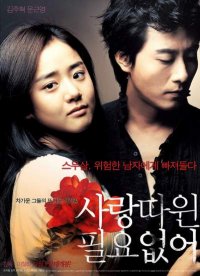 Julian has lived off with the money he lures from his rich female customers. But now he faces usurious debts from a hasty expansion of his business, and he will be killed unless he clears the debt in one month. The only way to save himself is to pretend to be the long-lost brother of an heiress and kill her to get her huge fortune. Min, the blind heiress, cold-hearted like Julian, slowly opens herself to him, and he, too, falls for her. But Julian has to pay his creditor and what makes it worse for him is that the illness that took Mins eyesight relapsed, threatening her life.

Love Me Not | Cast

Love Me Not
Stream and watch full movie

Love Me Not | News

Love Me Not | Shopping

Love Me Not | Soundtracks, OST (Sponsored)

Love Me Not | Pictures

View all 54 pictures for "Love Me Not"

Love Me Not | Videos | Suggest a video

Love Me Not | Links | Suggest a link

Love Me Not | Reviews

Love Me Not | Facts

Love Me Not | Community