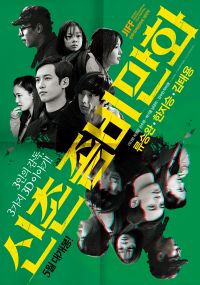 Ghost (유령, Yoo-ryeong)
Directed by Ryoo Seung-wan
High school student Seung-ho (Lee David) is obsessed with a group chat and has a crush on one of the members named Yeo Woo-bi (Son Soo-hyeon) whom he's never met before. One day she sends him a desperate message. "Help me" and "Kill me".
He heads for Sinchon with Bizen (Park Jeong-min-I), another member of the group to save her...

I Saw You (너를 봤어, neo-leul bwass-eo)
Directed by Han Ji-seung
"The day love fell, the world became a zombie."
In a world where humans and zombie curers live together, Yeo-wool (Park Ki-woong) the general manager who supervises the zombie curers, hates them but female zombie Si-wa (Nam Gyoo-ri) still follows him around. Then one day, Yeo-wool feels something for Si-wa who collapses from overwork...

Picnic (피크닉, Pi-keu-nik)
Directed by Kim Tae-yong
"Mom and dad are busy so you're going on a picnic with me"
Eight-year-old Soo-min (Kim Soo-an) lived with her mother (Park Mi-hyeon) and handicapped brother in a small ocean village. Her favorite thing to do is read comics under the covers. One day, her brother destroys her book and Soo-min makes up her mind. She takes her brother on a picnic and leaves him there...