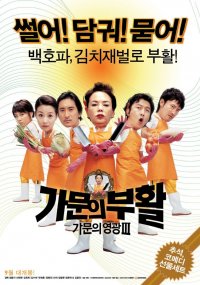 Synopsis
The White Tiger Family was a notorious criminal syndicate in Jeolla province. When her first son marries a prosecutor, Hong Deok-ja, the head of the Mob, leaves organized crime and starts a Kimchi business. However, the former prosecutor, Myeong-pil, who was put in prison for a crime of passion against In-jae, gets released and finds a chance to retaliate. Teaming up with the Axe Gang, he prepares a vicious plot to bring down the White Tiger Family. And as the Kimchi business fails because of Myeong-pils plot, the family gets thrown out on the street pennilessly. However, they dont give up that easily. Everybody unites and gets ready to fight back. The family is on its way back to glory!

View all 79 pictures for "Marrying the Mafia III"