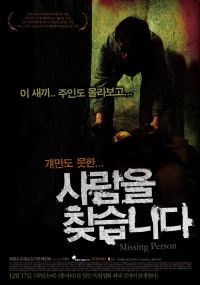 Kyu-nam, who makes a living by posting notices of missing dogs, is constantly harassed by Won-yeong, a violent, greedy and lustful man. But when townsfolk start disappearing too, Won-yeong begins to suspect Kyu-nam. The film shows how people can be the victim and perpetrator at the same time.

View all 23 pictures for "Missing Person"