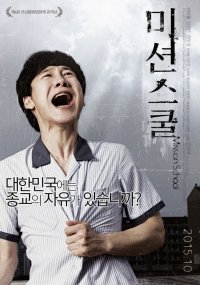 Synopsis
"I refuse mass from today!"

Dae Myung High School is a distinguished private Christian school and its mornings start with a hymn that is played throughout the school. Paul, the non-Christian student body president, can't stand the repetitive preachings and mass. He tells the principle that forced mass is unfair but no one listens to him. The one person in the teaching staff who used to advise Paul is framed as a religion unicameralist and is driven out from the school. Paul's friends and family are not pleased with him either. No one listens to him so in the end Paul refuses to listen to mass and goes on a one-man strike. The school puts forward a hard-line policy in the name of 'expulsion'. Will Paul be able to go back to the regular days?

This is the true story of a high school student in 2004.
The truth of what used to be uncomfortable is finally being revealed.

View all 37 pictures for "Mission School"