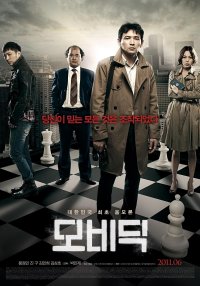 Synopsis
The title of this film may bring to mind Herman Melvilles classic novel, but Moby Dick is actually a chilling voyage through Korean history with enough conspiracy theories to make even the most nationalistic viewer question their government.
When a mysterious explosion destroys the fictional Balam Bridge on the outskirts of Seoul, veteran journalist Lee Bang-woo (Hwang Jeong-min) picks up the story and runs with it.
Around the same time, he gets a visit from his old friend Yoon-hyuk (Jin Goo), who offers some highly classified information on the case - that the explosion was no accident and that the government caused it.
Thinking the case is no ordinary job, Lee calls on his fellow reporters Sohn Jin-ki (Kim Sang-ho) and Seong Hyo-kwan (Kim Min-hee) to investigate. But when their investigation uncovers conspiracy after conspiracy, the group begins to question the government and they begin to get threats that could endanger their investigation and their lives.
With a highly esteemed cast of prestigious Korea actors, including Hwang, who is famous for his role in the 2009 film Private Eye, this movie is bound to raise some eyebrows and could be the harbinger of Korean films to come.

View all 64 pictures for "Moby Dick"