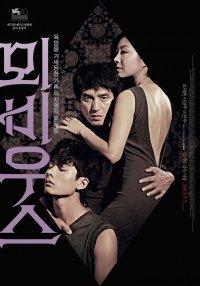 Synopsis
A father driven into desire, a son coveting that of his father's, and the sorrowful maternity that hovers them into tragedy. The most controversial work of Kim Ki-duk circling a destructive family while questioning one's basic sexual desires.
Following a lengthy hiatus after 2008's "Dream", Kim Ki-duk stormed back on the scene with two film, in 2011. First, with the self-documentary "ARIRANG - Movie", which earned him the Un Certain Regard prize at the Cannes Film Festival in 2011, and then with "Amen", which debuted later in the year 2012 was an even more auspicious year for the revered auteur as his film "Pieta" famously won the Golden Lion during the Venice International Film Festival. "Pieta", his 18th work, is still going strong on the festival circuit following dozens of invitations and umpteen award wins but film lovers are eager for his latest. "Moebiu"s completed its two week shoot earlier this yearned reunites KIM with actor Jo Jae-hyeon They previously worked together on "Crocodile" (1996), "Wild Animals" (1997), "The Isle" (2000, "Address Unknown" (2001) and "Bad Guy" (2002). With controversial subject matter reminiscent of last year's "Pieta", "Moebius" is likely to cause a stir when it is released later this year. The film also stars "Juvenile Offender"'s Seo Yeong-joo-I and LEE Eun-woo. from "An Ethics Lesson".

View all 65 pictures for "Moebius"